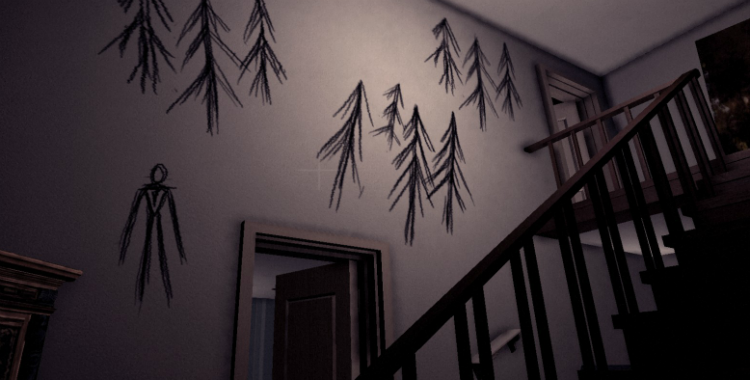 If you were part of the huge playerbase for the first Slender game, then you were likely scared shitless more times than you can count. Stumbling about like a wounded foal, the flashlight illumination mimicking your shaking hand as it grips the mouse. You think if you walk backwards, you might be able to grab that final note, and then you’re left wondering if anything would ever frighten you quite as much as the faceless predator standing at your back in Parsec Productions’ first indie masterpiece.

Well, bad news. Slenderman is back, and he has stepped up his game.

The latest instalment has been produced and published by Blue Isle Studios, and features a significantly stronger narrative and gameplay experience than it’s predecessor. Having arrived to visit your friend Kate, you stumble down a lengthy driveway towards the house in the distance. Things are not quite right, however, and as the fast paced descent into dusk draws you into the house, you see haunting etched mimics of the Slenderman across the walls.

The gimmick of the well-dressed monster hunting you in the forest was a resounding success in Slender: The Eight Pages, and that has not been forgotten. Although the search for your friend drives the story forward, you are still never given a moment’s peace in wake of the Slenderman. From the erratic crunching of grass underfoot to the way your flashlight catches the pine trees as you pan your surroundings, everything is designed to frighten the hell out of you. And it so works. As you progress, ominous pictures flash across your HUD, your camera starts stuttering and then fully distorts as the sightless terror edges closer towards you.

The Slenderman himself has learnt some new moves too. In the second stage, when you are required to discover eight notes (sound familiar?), you can find him getting more aggressive the closer you get to finding the full repertoire of notes – which includes picking up the pace to match yours. If your stamina runs out whilst you’re frantically darting across the forest, you could well be in a situation where Slenderman is right behind you. And there is nothing you can do about it.

The music cannot be ignored either – the soundtrack provides a tense accompaniment to the already heart-palpitation inducing fear you’ll be suffering through as you try and elude the Slenderman. It’s great to see more and more games allocating time to the sound production, especially in the newly developing horror genre. Undoubtedly the most foreboding noise that I experienced tonight was the low, enigmatic boom as you start the hunt for the eight notes – a friendly reminder that a faceless spawn of nightmares has taken a special interest in your presence.

Despite a few bugs with pathing and spontaneous-fatalities, the game is a resounding improvement over the first game. A fulfilling story and ending makes the experience much more immersive, rather than a jumpy game of kiss-chase with an eight-foot tall mass of limbs. With the release on Steam you can grab the game for £5.59 with a 20% discount and, even though the game is relatively short, the violent, clammy nightmares are absolutely worth it.

5 thoughts on “Slender: The Arrival”