Although conquering the world by land is great fun in Civilization VI, there’s something to be said for taking the world by sea. If you enjoy playing on Archipelago or Island maps, there’s a good chance you’ll skip the monotony of building roads for your troops and will simply take to the seven seas instead.

This time I’m going to dive in to my top 3 civilizations – in no particular order – for conquering the world by sea, and what makes them so adept at doing so.

If ruling the world by sea is your intention and you’re not afraid of building up a bustling faith economy, look no further than Gitarja, Queen of the Majapahit. With a blend of faith and gold, Gitarja has all the tricks necessary to build a strong, tall empire before you head off to bombard your naval neighbors.

Gitarja’s big draw is her unique unit – the Jong – which is earned when you reach Mercenaries in the Civic Tree. Replacing the Frigate which is usually earned at Square Rigging in the Tech Tree, the Jong doesn’t need any niter to be produced, moves a bit quicker, and has formation bonuses too. The required civic is unlocked just before your second tier government – usually Merchant Republic but arguably Reformed Church – which spells the perfect time for you to fire out a legion of Jongs and storm the isles. Merchant Republic is a grand choice if you like your gold, where Reformed Church could be a brilliant choice for the discount on faith purchases.

But wait, why is a faith discount beneficial?

Why, I’m glad you asked. Gitarja’s leader ability, Exalted Goddess of the Three Worlds, allows her to purchase any naval units with faith rather than gold. In addition, any City Center located next to a lake or on coast generates +2 faith – phenomenal in the early game when you are looking to get your pantheon up and running, and quick to accumulate as you settle your following cities along the coasts. Following the September 2019 update which vastly improved the quality of coastal cities, Gitarja starts strong and only gets stronger.

So, what pantheon do you pick? In almost every instance I can think of – especially with the incredible appeal you’ll be seeing on Archipelago and Island maps – it’s Earth Goddess. The +2 faith on tiles with breathtaking appeal is just too strong to compete with – a good settle will see your City Centers generating 4 faith per turn, and anything around mountains, coasts, wooded areas, or natural wonders is going to see faith added onto its yield. It’s a beast of a pantheon, and will easily make up the bulk of your faith generation in any given game.

Back to Gitarja. Indonesia’s ability is Great Nusantara which will cause lake and coastal tiles to provide a minor adjacency (+0.5) for any Holy Site, Campus, Theater Square, or Industrial Zone which borders it. That’s nuts when you’re surrounded by so much water, and gives you a lot more flexibility when placing your districts – Campus districts are simple if you can find a reef and have it border two water tiles for a +3 adjacency, Holy Sites can get a bit of extra adjacency to kick off your faith economy, and if you happen to have a single tile of land surrounded by water somewhere in your borders, perfect – that’s a +3 district all to itself.

Food will already be a non-issue for Gitarja with her coastal tiles, but you can grow your early empire nice and tall once you hit Shipbuilding in the Tech Tree and have access to Kampungs. They’re great improvements for shallow water tiles between resources as they get an additional +1 food for each adjacent fishing boat, as well as a static +1 production and +1 housing. You get an extra +1 housing at Mass Production, a further +1 production at Civil Engineering, and the additional food generated becomes tourism when you hit Flight. Beyond letting your empire grow or letting you pivot in the late-game to a culture victory, it provides some serious cultural defense as you clinch your naval victory.

Indonesia are bonkers when it comes to naval domination in the mid-game but, like any good civilization, she also has the benefit of abilities which contribute to a solid economy. You’ll be able to plan your settles and districts early on, clinch a wonder or two to bolster your Theater Square adjacencies, and then you’re off to the races. You can’t really go wrong.

When it comes to building an empire, no civilization is better than Hojo Tokimune’s Japan. Packing your cities in nice and tight is almost a guarantee on tight ocean maps, and Hojo does it best to make his cities as prolific as possible, building his way to just about any kind of victory you want. I could have put him in any “Top 3 Civ VI Leader” guide due to his versatility, but he’s a powerhouse naval force too.

Unsurprisingly, Hojo’s unique unit is the iconic Samurai which, naturally, has no bearing on a naval victory at all. That said, if there are pesky city states or – heaven forfend – major civilizations that you share an island with, a strong mid-game unit to supplement your naval assault is always a positive. It would be prudent to note Hojo’s leader ability, Divine Wind, is killer for the Samurai too – granting +5 combat strength to land units adjacent to coast.

That combat strength bonus doesn’t just apply to land units, but also to naval units in shallow water tiles. You know, right where cities are usually located? You see where this is going.

That’s all there is to it. Japan doesn’t have a unique naval unit, or any Harbor district replacements. What they do have, courtesy of Japan’s ability Meiji Restoration, is an outrageous ability to place monstrous districts. Every district receives an extra standard adjacency for being next to another district. This allows for Japan to build a strong and resilient empire in the early game, and prepare for war through the mid and late game.

In layman’s terms, Meiji Restoration means that every district will get a +1 for being next to another district, as well as the usual +0.5 for being next to a district anyway. With the City Center counted as a district for these purposes, you can start building some outrageous adjacency bonuses, buoyed by the fact that these districts don’t need to be limited to one city – every one of your city’s districts hands out this bonus. Couple this with Divine Wind‘s secondary bonus which allows for Encampments, Holy Sites, and Theater Square districts in half the time, and you can start stacking up those adjacencies really quick.

If you have your City Center near a river and you place a Commerical Hub district next to the river and the City Center, it will always be a +3 district. If you place a Harbor district next to it, forming a district triangle (and knowing that Harbors contribute +2 to any Commercial Hub), that becomes a +6 adjacency. If you have a coastal city and a reef nearby, a Campus district placed next to the City Center and adjacent to the reef will make it a +3 district every time.

When I went for Japan’s steam achievement which requires a district surrounded by 6 districts, also called Meiji Restoration, I went a little overboard and had districts stacked on top of eachother as far as the eye could see – +8 and +9 district adjacencies were commonplace, which felt great.

So yeah, Japan has a great combat bonus for naval battles on coastal shores, and all the district bonuses needed to economize and build your empire nice and tight. While not as overtly naval focused as Gitarja, Hojo Tokimune is still one of the most powerful naval domination civilizations in the game. 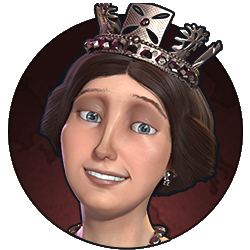 Queen Victoria of England has had quite a few revisions since the release of Civilization VI, but still focuses on her core theme of colonizing the continents of the world. Of course, you can’t colonize the world without having a strong naval presence, and Vicky gets a few good bonuses to help her spread the empire around for everyone to enjoy.

The first thing to note is that Victoria gets a unique district which replaces the Harbor district called the Royal Navy Dockyard. It requires half the production of a standard Harbor district – which is great for getting your city up and running on the coast – and also removes the embark/disembark movement cost when moving through the district. Even better, it also generates +4 loyalty per turn when in a city which is on a continent other than Victoria’s home continent. This makes it easier to break onto the scene on a new continent and establish yourself without losing control of the city.

If you do find yourself in trouble though, you can rest in the knowledge that you’ll instantly receive a copy of your most powerful naval unit courtesy of Victoria’s leader ability Pax Brittanica.

New continents are dangerous, scary places. Luckily, Victoria’s Pax Brittanica leader ability strikes again, meaning that whenever you settle a city on a foreign continent, you gain an additional trade route and a copy of your most powerful melee unit, completely free. This by itself is fantastic, but gets even better when you consider England’s unique unit – the Redcoat – which is unlocked at Military Science in the Tech Tree.

This absolute behemoth gets a whopping +10 combat strength when fighting on a foreign continent, meaning that if you time your settles correctly, you’ll be practically invincible as your newly-settled cities economize, or primed and ready to launch an attack on your new neighbors with one of the most fearsome units of its era. Be wary of its hefty 5 gold maintenance cost though, and keep building Royal Navy Dockyards and Commercial Hub districts (in a triangle to maximize efficiency) to keep the cash flowing as you expand your British empire.

Victoria also gets some benefits to production via England’s ability Workshop of the World, with a quicker Industrial Zone and more resources accumulated when you mine iron or coal. She also has some bonuses towards Military Engineers which are more-or-less useless, but some yield bonuses to powered buildings and – notably useful if you’re warring a lot – the ability for Royal Navy Dockyard buildings to +10 to your max stockpile for strategic resources.

So how will you conquer the oceans? You’ll need to make your way to Mercantilism in the Civic Tree to unlock the Sea Dog, which is a replacement for the Privateer. It’s invisible to just about everything unless the unit is adjacent to you, allowing you to rush enemy boats in groups. Better yet, it also has the chance to capture a major civilization’s ship when you destroy them, bringing it into your navy and allowing you to continue your attacks on the shoreline.

Victoria has a great toolset which serves as a fair analogue to the expansion of the British Empire, focusing on being strong as you wage war abroad, and colonizing wherever you lay your flag. I don’t find Victoria to be as strong as Japan or Indonesia the higher up the difficulty ladder you go – settling cities as late as the Industrial Era when you’re looking to get your free Redcoat units is suboptimal and can leave you behind your rivals economically. If you can hold your own into the late game, however, Victoria has a bag of tricks which can be a real bastard to get past.

Which civilization is your favorite for naval domination? Let me know in the comments below!